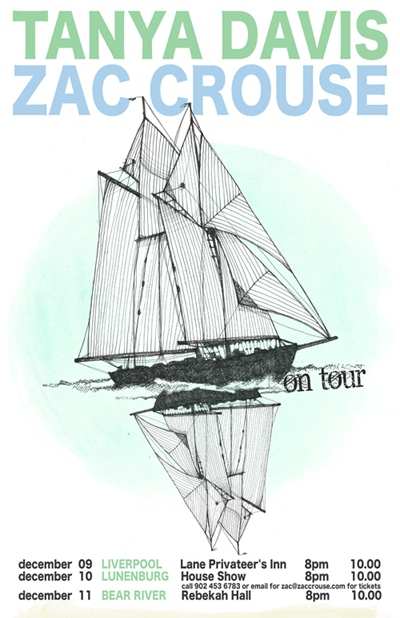 Zac Crouse and Tanya Davis at the Rebekah Music Hall (Both will be accompanied by Kris Pope (of Acres & Acres) on lap steel)
Saturday December 11, 2010, 8pm / $10

Zac will be playing tunes from his debut album You plan to do nothing: a collection of folk songs about the ocean, politics, & ladies. Most of the songs were written while Zac circumnavigated the island of Newfoundland in his sea kayak.

Zac Crouse
Solo
http://www.zaccrouse.com
Caledonia
http://www.caledoniatheband.ca
Tanya Davis:
Since bursting onto the Halifax music scene in 2006 with her debut, Make a List, Tanya has garnered praise from industry, audience, and peers, as well as multiple award nominations, including one for her sophomore release, Gorgeous Morning, for the 2009 ECMA Female Recording of the Year. She is a 2 time winner in the CBC National Poetry Face-off as well as the Canadian Winner of the 2008 Mountain Stage NewSong contest. In 2009, with support from Bravo, she collaborated with independent filmmaker Andrea Dorfman to produce a short videopoem entitled “How to Be Alone;” the short has since been featured at numerous film festivals, including The Vancouver Film Fest, The Worldwide Short Film Festival, and the VideoPoetry Festival (Berlin). It also has 1.8 million views on Youtube.

Get these notices delivered to your email. Sign up here.